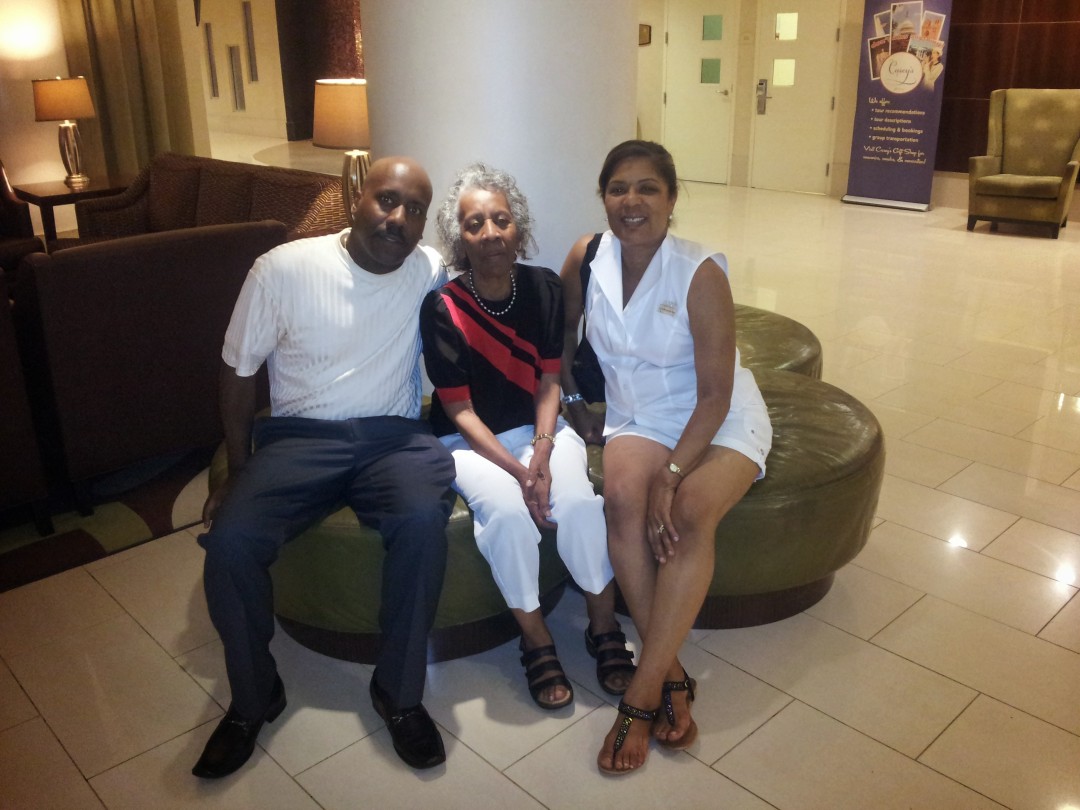 Published by TheRoot.com and the PBS site NextAvenue.org published the project as well as New America Media and FierceforBlackWomen.com, which ran a longer version. Lamb was a year-long John A. Hartford/MetLife Foundation Journalism in Aging & Health Fellow, a project of New America Media and the Gerontological Society of America. She was also an Alzheimer’s Disease Fellow through the National Press Foundation.

As the 2013 John A. Hartford/MetLife Foundation Journalism in Aging & Health Fellow, I spent a year researching Alzheimer’s disease, other forms of dementia and caregiving. Changes in the brain can cause dementia, severely impairing mental abilities including memory, movement, reasoning and thoughts. African-American women and men are two to three times more likely to develop dementia than white Americans.

After extensively interviewing several people with dementia, caregivers and medical experts, I found the perfect family to profile right here in Washington — a single man caring for his 83-year-old mother. He was also a rarity. Only a third of caregivers are men, according to a study by the National Alliance for Caregiving and AARP. Men are less likely to be the main or only person in this role. They’re less likely to be involved with personal care and more likely to pay for it. In addition to presenting a different face of caregiving, this family helped to illustrated the commonalities that affect everyone as well as the unique attributes of African Americans, who are 65% more likely to be primary caregivers than other groups.

New America Media, a coalition of 3,000 ethnic news organizations, provided oversight, peer review and editing of this year-long project in collaboration with the Gerontological Society of America. I also attended GSA’s annual scientific meeting and NAM seminars, building upon my previous research at the National Institutes of Health (NIH) as an Alzhiemer’ s Disease Fellow through the National Press Foundation. TheRoot.com and the PBS site NextAvenue.org published the article as well as New America Media and FierceforBlackWomen.com, which ran a longer version.

Within 48 hours, the article on TheRoot.com attracted 4,958 likes on Facebook, 1,244 shares and 344 comments. “Dealing With Dementia” won a Salute to Excellence Award from the National Association of Black Journalists. The Hartford Foundation also used the article to inspire family caregivers and health providers to share stories for Better Caregiving, Better Lives: Real Life Strategies and Solutions. Various organizations invited me to speak about the article, including AARP and the Association of Health Care Journalists. I continue to research and work on projects related to dementia and caregiving as well as the intersection of the two.

Dealing With Dementia: Impact at a Glance:

My special report on dementia meets criteria No. 1 and 10 set forth on pages 9 and 10 in Appendix A of Recommendation 305-2015as an Exemplary Creative/Professional Activity:

Dealing With Dementia: Caring for My Mother

Todd Shurn braces his mother from behind, her arms resting on his as they shuffle into a restaurant in lockstep. Alice Shurn is frail and a fall risk, but she has no chance of hitting the ceramic tile floor. Her only son is determined to keep her safe. It’s what he has done day after day for nearly four years.

It doesn’t matter to Shurn that he’s a single man in a vibrant city like Washington, D.C. When friends try to nudge him out of the three-bedroom house that he shares with his mother for a night on the town, he usually declines. His world orbits around his mother, and he’s OK with that. Their lives are in lockstep.

“My life is dedicated to making her happy,” Shurn says. “The loss of my personal freedom — I’ve accepted that. I can’t do anything.”

Men like Shurn are not as rare as they used to be, but they are still in the minority when it comes to caregiving. Only a third of caregivers are men, according to a study by the National Alliance for Caregiving and AARP. Men are less likely to be the main or only person in this role. They’re less likely to be involved with personal care and more likely to pay for it.

He has a sister in Atlanta — more than 700 miles from their family home in Benton Harbor, Mich., and she has two children. So, Shurn does it all with the help of an aide who relieves him when he goes to work at Howard University, where he’s an associate professor in the Department of Systems and Computer Science.

He’s had to learn how to bathe his 83-year-old mother, brush and floss her teeth, feed her, clothe her and comb her hair into something more or less presentable. Today, her silver locks are hidden beneath a gray flapper’s hat with a matching wool flower on the side. Dressed in gray pants with a red-orange sweater over a white turtleneck, she smiles adoringly whenever she glances over at her son next to her in the booth.

In early 2011, Mrs. Shurn was diagnosed with Lewy body dementia, named for Dr. Frederick H. Lewy who discovered the abnormalities in how the brain processes the alpha-synuclein protein in the early 1900s. Dementia with Lewy bodies (DLB) is the third most common form of dementia after Alzheimer’s disease and vascular dementia. Its brain changes are somewhat similar to those of Alzheimer’s and Parkinson’s disease.

Mrs. Shurn’s brain has a buildup of protein deposits called Lewy bodies in nerve cells that control how she moves, how she thinks and what she remembers. Her shuffled walk, balance problems and hunched posture are classic symptoms. Just before diagnosis, she developed orthostatic hypotension. Her blood pressure would plunge when she stood, causing her to fall — once into the family Christmas tree — or pass out.

The brain cell damage causes fewer memory problems than Alzheimer’s disease, allowing her to reminisce with her son sometimes and maintain her love for piano playing at an adult-care center that she visits on occasion. However, it affects her attentiveness and ability to reason, requiring Shurn to redirect his mother’s hands periodically from sprinkling sugar on the table. He reacts calmly with patience and smooth repetitive motions, like a parent who’s used to moving a child out of harm’s way or minimizing a mess. Every now and then, he says, “Don’t do that,” to no avail.

← Hanging at LeBron’s High School Kerner @ 50: Communication and the Politics of Race in the United States →