The requirements for promotion from tenured associate professor to full professor are set forth in Recommendation 306-2015 and the departmental Guidelines for Creative Achievement in Appendix A. Taken together, these documents offer examples of scholarly and creative activities that have been deemed “exemplary” and “high” as determined by the faculty, peer institutions and best practices of the discipline.

I have a solid record in teaching, research/creative work and service — all of which have consistently been measured as high, outstanding or exemplary in annual evaluations. This is reflected in the summary below and throughout this portfolio, also accessible by hyperlinks in this document. Please note that professional development is now evaluated as part of teaching, research/creative work and service. However, my professional development activities are also grouped in a separate section because of overlaps and to make it easier to find everything in one place.

The journalism section on page 7 of Appendix A also notes the following:

While length may be a consideration, it should not be the overriding consideration in evaluating a piece of work. What is more important is the quality of the work and its impact on public debate and to what degree it speaks for the voiceless in underserved communities. A series of short pieces that are timely can make as valuable a contribution as a book, which can take months or years before it reaches the public.

The candidate shall possess … a master’s degree and professional distinction at the national or international level.

I earned a Master of Business Administration from Howard University in 2005, and I am in my second year of the Doctoral Program in Medical Sociology. My “professional distinction at the national level” is based on 38 years of extensive experience and exemplary achievements in academia and at top-tier journalism organizations as detailed in my curriculum vitae. I have a national reputation and respect as an educator and a journalist who has integrity, high standards and a track record of excellence. This includes positions at leading publications, ranging from the New York Timesto Essence. I am also one of the few African-Americans to serve as editor-in-chief of one or more national magazines, such as BET Weekend and Heart & Soul, where I was also served as vice president, associate publisher and editorial director.

As chair of the Department of Media, Journalism and Film, I represent one of the leading communication programs in the country — one of only three accredited in the Washington area. I have collaborated with faculty and leveraged my network to enhance visibility and opportunities for our audio, television, film and journalism programs. In my discipline, I have been a leader in ensuring that the journalism program continues to rank in the top 20 nationally by USA Today and College Factual.

Here are highlights of my national distinction:

ROBOT JOURNALISM: Advertising and readership challenges amid the current media revolution were topics of the World Newspaper Congress in Italy. To coincide with the congress, the Deutsche Welle television network  interviewed Yanick Rice Lamb at Howard University and other media experts about the controversial changes at companies such as Forbes to use algorithms to report certain stories and what these techniques mean for the future of journalism. The segment appeared on “Journal,” which is based in Deutsche Welle’s multimedia newsroom in Berlin. “Journal” reports on international news in German, English, Spanish and Arabic. (Click on the arrow or on the words “Robot Journalism” in the lower left corner of the video to watch.)

The candidate shall have at least five (5) years of prior teaching experience at an excellent level of proficiency. 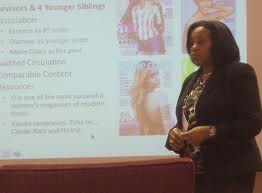 Within the last six (6) years, the candidate shall have:some

I have exceeded this requirement by submitting 29 research/creative activities, including peer-reviewed media productions, book chapters and articles that have been published or accepted for publication over the last six years in accordance with Recommendation 306-2015 and Appendix A. My overall research evaluations by the school-wide and departmental APT committees, previous chairs and deans for the past six years have averaged 4.69 out of 5, or 94 percent. 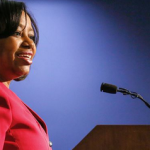 Black History Month keynote speech at the University of Toledo.

The candidate must have provided significant university and/or related community service as determined by the department forwarding the recommendation.