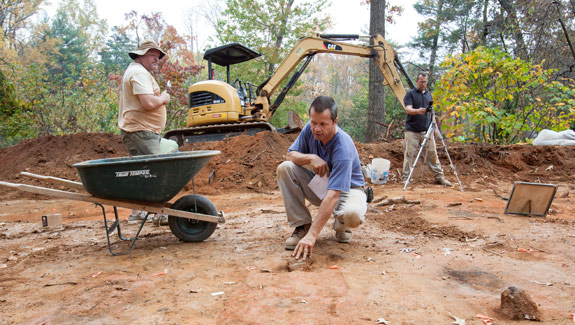 Lamb, Y.R. (March/April 2013). “In Death, New Life: The Discovery of Unknown Graves at the University of Virginia Reveals the Institution’s Brush With Slavery.” The History Channel Magazine.

I was invited to write this article about the discovery of a burial ground during renovations at the University of Virginia. The article discusses some of UVA’s slave past, preservation plans and other forgotten cemeteries. It highlights history that has literally been buried.

Archeologists discovered the sacred ground of 67 African-American children and adults, possibly dating back to slavery, while investigating the suitability of land to expand north of the University of Virginia Cemetery and Columbarium. Some graves are thought to be those of enslaved people who brought Thomas Jefferson’s dream of an “Academical Village” to life. Some of them worked on the construction of these buildings, and others were at the beck and call of faculty and students.

Ervin Jordan Jr., associate professor, research archivist and Civil War scholar who is writing a book on the history of slavery at UVA, Jordan points out that even Jefferson, who is known for his meticulous records, fell short when it came to documenting the life and death of African Americans working on his property, some of whom ended up at UVA. This article shed light on the discovery of graves nationwide and the issues surrounding preservation of ancestral remains against commercial interests in real estate and highways.