Published by the Asia Pacific Media Educator, a refereed journal published annually by the School of Journalism and Creative Writing at the University of Wollongong, NSW, Australia

I helped to conceive, develop and execute coverage of the 2008 presidential election and 2009 inauguration. On Election Day, we worked in the Converged Media Lab from 7 a.m. Tuesday until nearly 4 a.m. Wednesday, when our lead reporter updated her article on President-Elect Barack Obama. We conducted a similar, but smaller operation for the inauguration. I later co-authored this research paper with journalism faculty at Howard University. This project also helped to set the stage for our 2012 presidential coverage and our midterm election coverage in 2014

Upon graduation, this new generation of journalism students will work in converged newsrooms that operate on a continuous news cycle. The converged media coverage of the election and the inauguration illuminated the critical importance of hands-on teaching and guiding students through the complexities of how to use of social media and other eeb-based tools as effective, ethical journalists.

Students were required to think critically, work collaboratively and engage in entrepreneurial and innovative problem solving. The projects offered students deadline driven, real-life experiences with people of different backgrounds and cultures – often for the first time – and allowed them to directly experience reporting diverse points of view.

Although internships also provide practical experience, there is much value in having projects developed by the journalism department, because faculty can develop, monitor and evaluate the projects internally to ensure students learn. A key decision in planning for the election coverage was to treat the entire department as a large news organization. Journalism students were excused from classes on Election Day and again on Jan. 20, 2009, to cover the inauguration. More than 200 students blanketed the region in addition to those who returned to their hometowns to vote and add a national dimension to the project, including real-time coverage of President-Elect Barack Obama’s victory speech in Chicago through the use of cell phones by a student in attendance.

My research paper meets criteria No. 3 set forth on page 3 in the Department of Journalism’s APT Philosophy as an Exemplary Research Activity:

Together, Publications No. 4, 5 and 6 merit an Exemplary score of 5 for Publications under Scholarship on the Faculty Performance Evaluation rubric, which states:

This research paper outlined our convergence plan as a model for other universities, detailing best practices and potential pitfalls. Starting before dawn on Election Day and working long past midnight, the students produced more than 80 print articles, hundreds of photos, a dozen blogs, and 20 video and audio packages. The students’ work was distributed via campus media and uploaded to YouTube. The Washington Post was among the publications citing the students’ work. On Inauguration Day, the Afro-American newspapers, the (N.J.) Trentonian.com, Human Nature online magazine and BlackAmericaWeb.com picked up student-generated coverage. 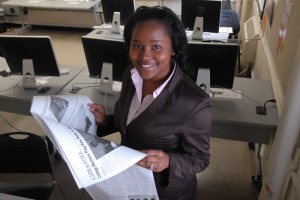 I supervised some of the lead student journalists on the project who were enrolled in my News Lab class, including Jamisha Purdy whose work was cited as part of her selection by the National Association of Black Journalists as its 2008 Student Journalist of the Year. Jamisha’s article declaring Barack Obama as president was posted online ahead of the New York Times and CNN. Some of the student work is also being submitted to national journalism competitions.

The project and research article were based in part on best practices in convergence journalism — efforts to cover news in real time as part of a 24/7 environment across multimedia platforms (print, online, radio and television), utilizing the latest technology. The critical element in the project was the impact of teaching by engaging the students in experiential learning, defined as “participative, interactive, and applied. It allows contact with the environment, and exposure to processes that are highly variable and uncertain. It involves the whole-person; learning takes place on the affective and behavioral dimensions as well as on the cognitive dimension” (Gentry, 1990). The paper also tied in other qualitative and quantitative research.